A Critical Assessment of the Traps in Home Alone 2 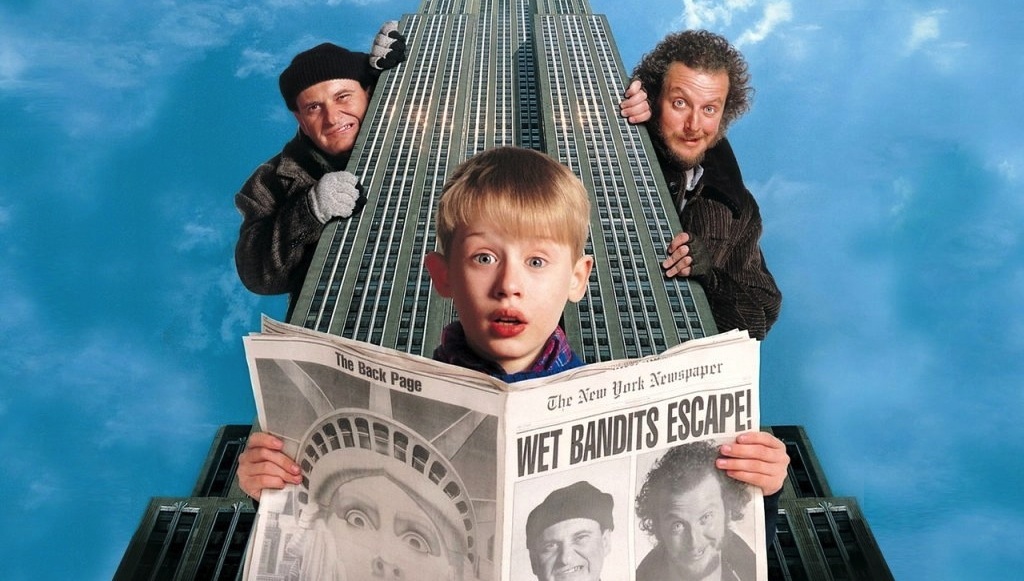 Home Alone 2: Lost in New York is a laugh-out-loud, family romp, that will make even the biggest of cynics grin. It’s all hugs and giggles as Kevin McCallister runs around New York, evading sleuthing hotel clerks and putting a damper on a pair of bumbling crooks looking to rob a toy store on Christmas Eve.

Since watching Home Alone 2 for the first time 21 years ago, there hasn’t been a Christmas when Kevin McCallister didn’t visit for the holidays. Even now, I still laugh at the bricks to the face, the rusted sink attached to a live electrical amp, and, most of all, the toilet filled with flammable liquid. What a riot!

As the years floated past, however, my eyes have slowly opened to Kevin’s true barbaric nature. Jigsaw would be proud—if he isn’t Kevin McCallister as an adult. Don’t get me wrong, Home Alone 2 is still a delicious treat for all the kiddos, but I’ve come to realize now that no human being could ever endure Kevin’s little house of horrors.

I recently sat down and worked through a majority of the traps featured in Home Alone 2 and chronicled just what would happen if the Sticky Bandits met Kevin McCallister in the real world.

The results are not pretty. 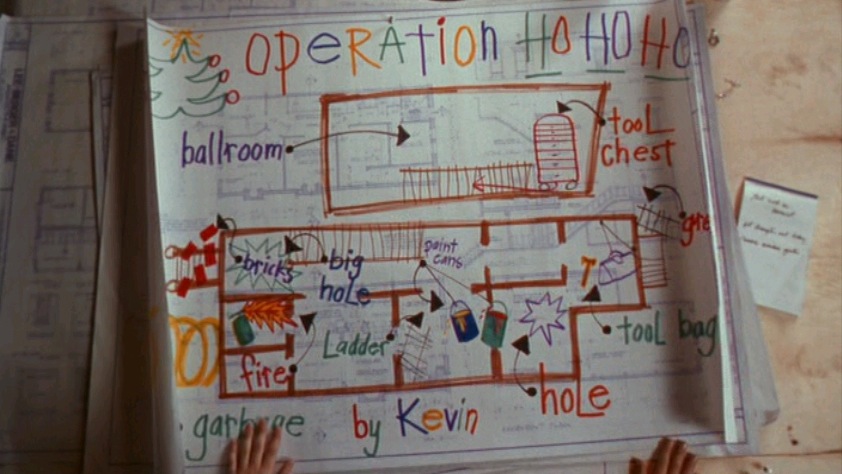 We’ll pick up just after Harry and Marv’s plan to rob Duncan’s Toy Chest is thwarted by our little antihero. The bumbling burglars chase Kevin back to a rigged apartment for what is going to be an evening of tricks and kicks. They should have gotten out while there was still time.

1. Bricks to the Face 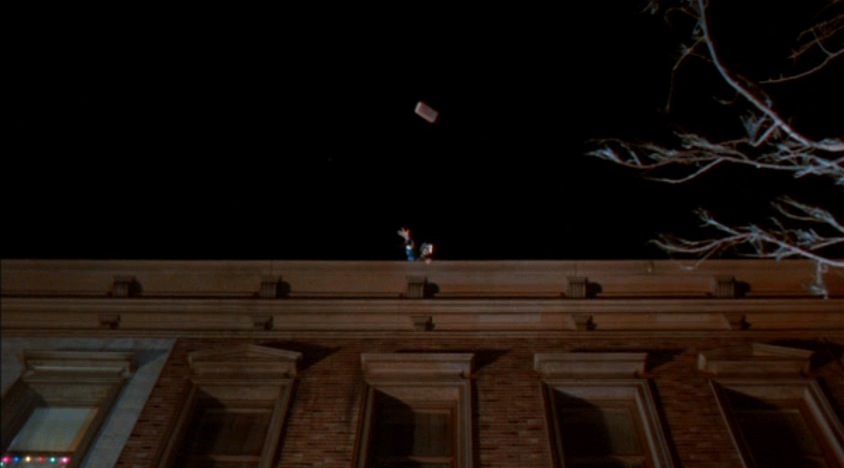 The Trap:  Upon arrival, Harry and Marv find Kevin on top of the three-story roof, gearing up for what is about to be the worst night of their lives. What happens next is a little bit of pain and a whole lot of comedy. Employed to throw down his camera, Kevin pulls the old switcheroo and drops a brick on them. Literally.

A handful of blocks come hurtling down three-stories, hitting Marv directly in the temple. Talk about a headache! Four “direct hits” later, and we’ve started out with a bang.

Medical Prognosis: If each of the bricks—roughly six pounds each—fall about 40 feet (or three-stories) to hit Marv in the Frontal or Parietal section of his skull, the chances of him surviving are slim to none. Multiply this by 4x and the Sticky Bandits are now the Sticky Bandit. 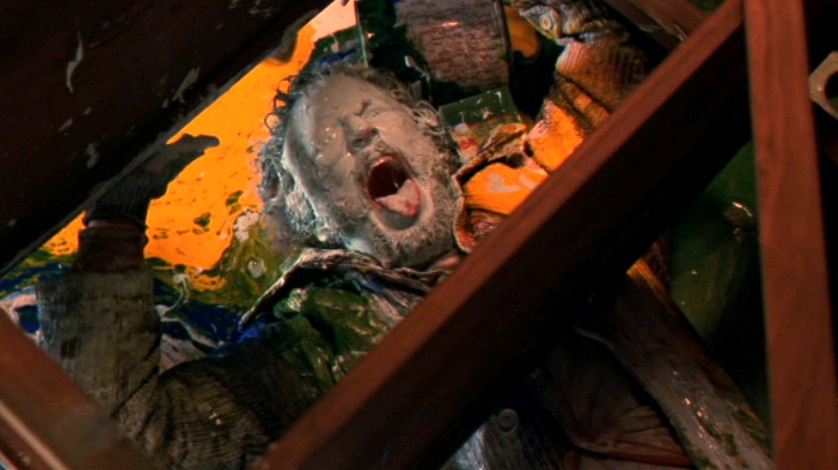 The Trap: After the brick escapade, Harry and Marv pull a horror movie no-no and split up. Individually, they both meet a barrage of traps designed by Kevin to inflict as much pain as possible, while still keeping his subjects alive.

Marv approaches the front of the house, only to be shot with one-inch staples, experience a one-story fall, and finally, showered with a shelf of paint cans. If you’re not laughing yet, you’re not living yet.

Harry moves to the back of the apartment and meets a greased fire escape, a bag of tools straight to the head, and later, a ladder which collapses mid-climb. 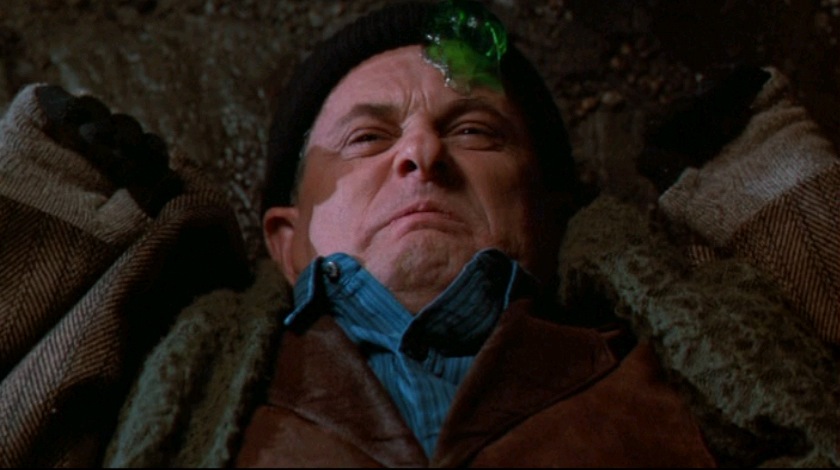 Medical Prognosis: Let’s start with Marv, who—as far as I can tell—is already a walking miracle. The one-inch staples to the buttocks, groin, and nose, while painful, are not going to inflict any lasting damage. We can expect a couple of broken ribs and a bruised sternum from his first fall. The bigger issue, however, are the paint cans. Marv is doused with what looks to be an oil-based acrylic. If not treated properly, he is in danger of paint poisoning, a life-threatening diagnosis.

Harry seems to be getting the lighter brunt of pain so far. But, rest assured, the night is still young. Both falls will likely result in a some minor back injuries he’ll deal with into his old age. The tools to his head will probably give him a mild-to-serious concussion. While dangerous, neither of these injuries are life threatening. 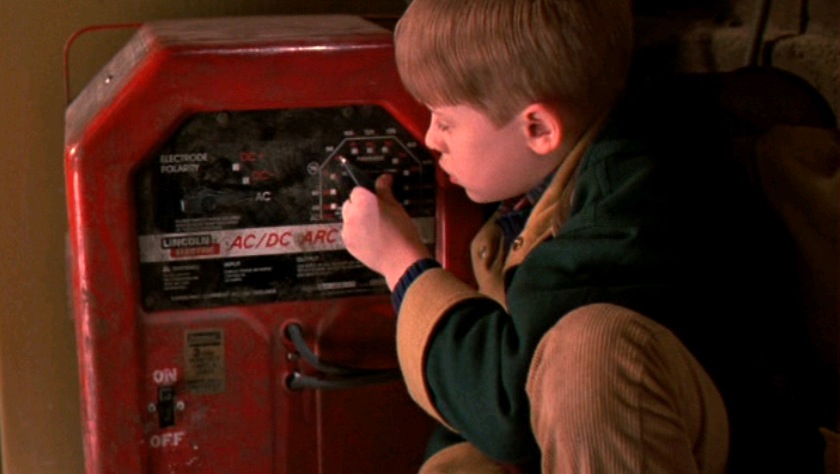 The Trap: Get ready because this next trap is about to shock you (pun). Looking to clean the paint off of his face, Marv approaches a small sink in the basement. Unbeknownst to him, Kevin has rigged an AC/DC Arc Welder to both handles. Marv is electrocuted for a good 18.16 seconds before Kevin shuts the power down. I did a little investigating and this particular Lincoln Arc Welder has an output range of 40-225 amps. Kevin turns up the dial about halfway. Enough to raise the hair on your head!

Medical Prognosis: Definitely not this: 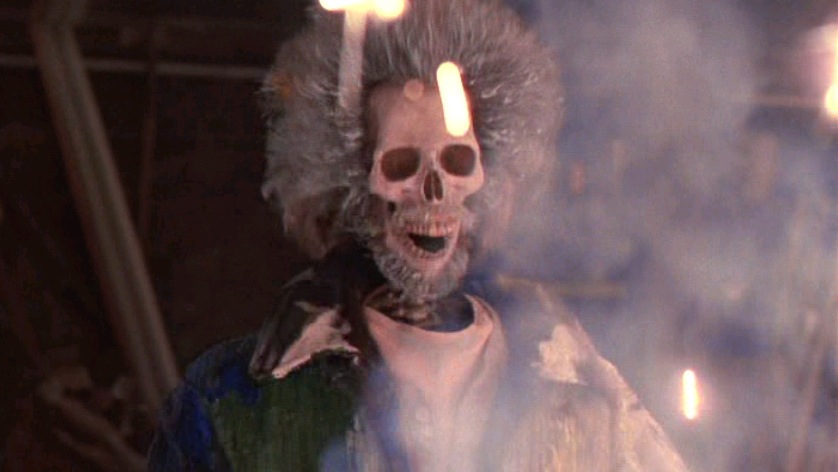 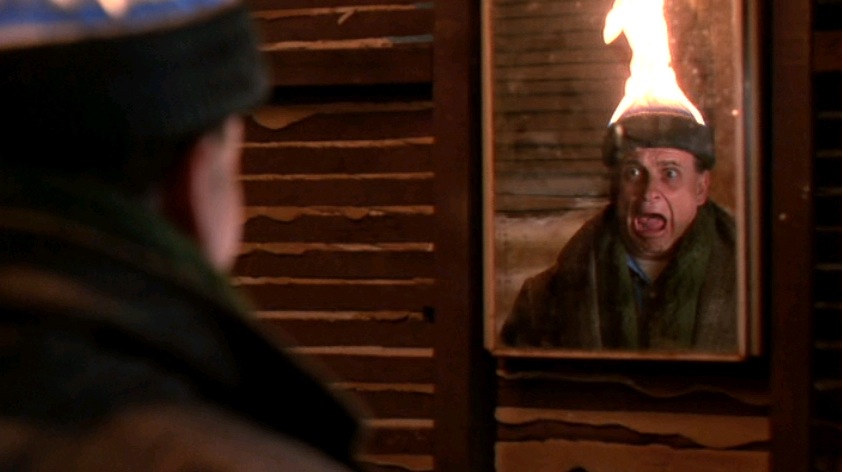 The Trap: This next one is a fan favorite. Harry walks into a bathroom, flips on the light, and unknowingly lights his head on fire. LOL.

When he can’t get the sink to work, Joe Pesci’s character is forced to dunk his face into the toilet. Here’s the catch, Kevin has recently filled el baño with flammable liquid. KABOOM. 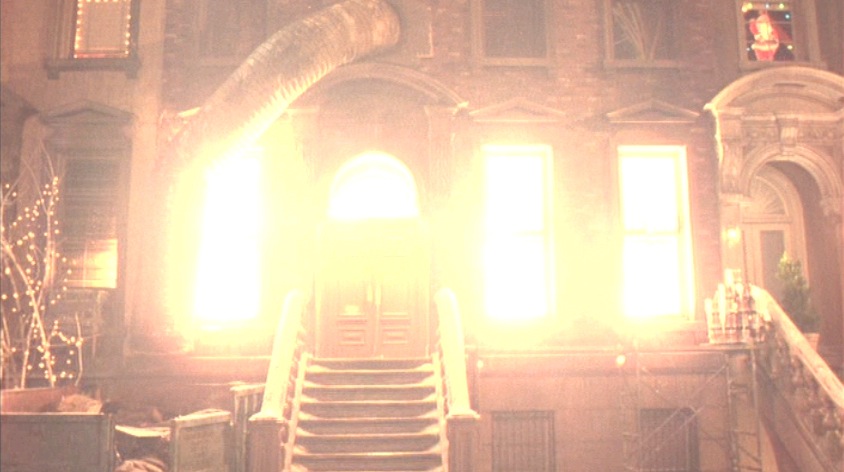 Medical Prognosis: We’re not told what’s exactly in the toilet, but it’s enough to create a light show any pyromaniac would be jealous of. While possibly alive, Harry will have experienced severe third-degree burns and temporary (if not permanent) blindness.

Probable Result: This one’s a toss up. I’m going to go with “live to see another trap,” but only if paramedics show up within the next 30 seconds. 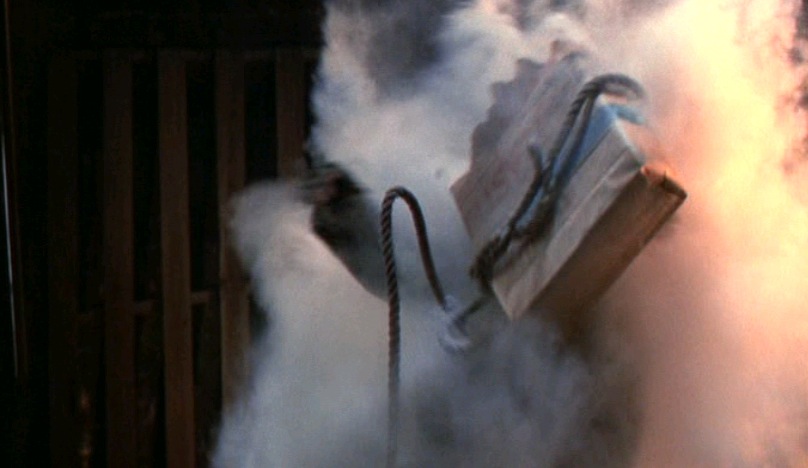 The Trap: Attempting to reach Kevin, Marv notices a rope leading from the basement to the second floor. What on this green earth could possibly go wrong? The rope seems secure, so Marv grabs ahold, not realizing it’s fastened to a 100 pound bag of flour. The bag—weighing almost as much as I did in 9th grade—falls two stories and lands on Marv’s head. 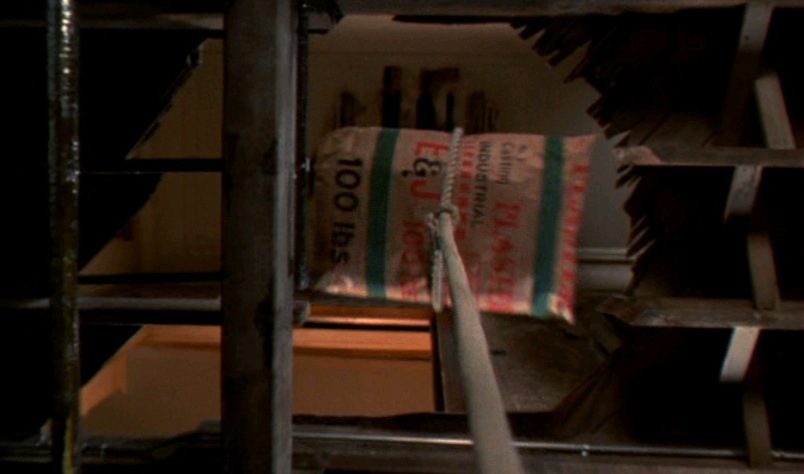 Probable Result: I’ve going with Rat Bait here just because Marv already has one foot in the grave. 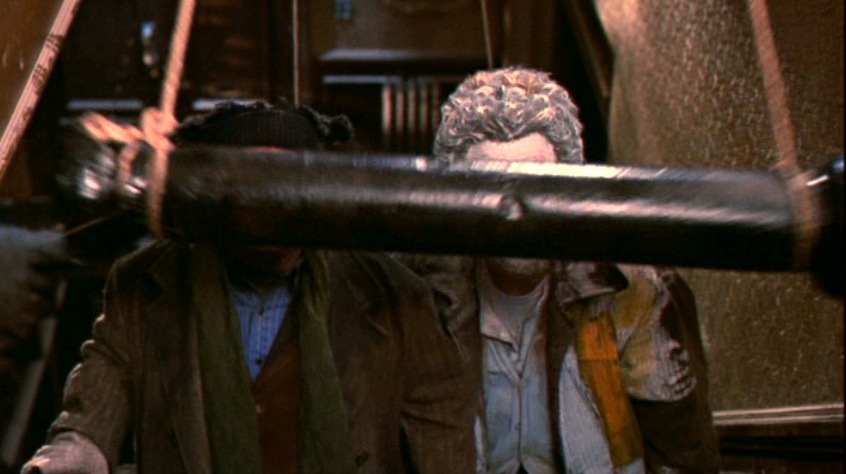 The Trap: Marv and Harry are reunited for Kevin’s next three Christmas presents. The first comes packaged as a large-cylinder shaped pipe swinging from the staircase. Harry and Marv are leveled in the face with Kevin’s agent of death, catapulting them down a hole in floor to the basement. But wait, there’s more! Kevin clips the pipe and it tumbles down on our two bumbling burglars. Two tricks for the price of one.

Medical Prognosis: The exact weight of the pipe is somewhat vague. While the object looks fairly heavy, Kevin, nine years old at the time, is able to lift it over the staircase. A fair estimate would be between 40-60 pounds. The impact of such, would result in a few more cracked ribs, a broken jaw, and, a possibly fractured collar bone. 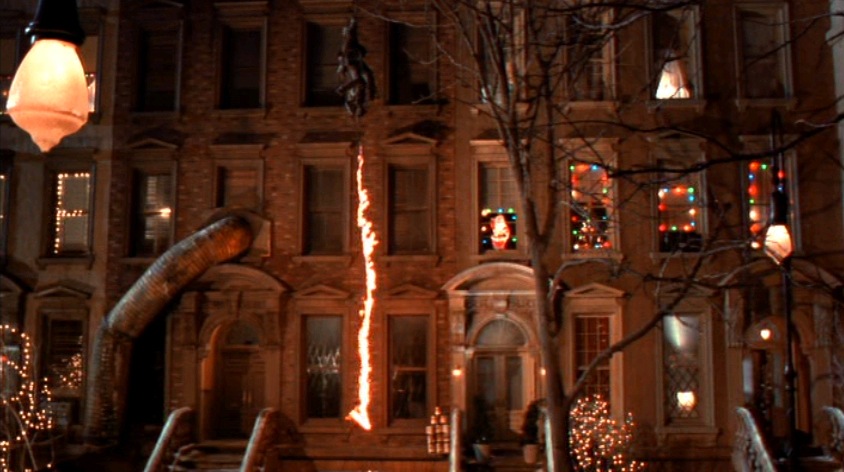 The Trap: We’re going to skip past the toolbox falling down the stairs (which hands out broken noses all around), and get straight to our main event. With Harry and Marv in tow, Kevin climbs down from the roof of the apartment via a large rope. The Sticky Bandits quickly follow, not realizing Kevin has soaked the cord in kerosene. After Kevin lights the strand of death, Harry and Marv fall three stories, hitting a wooden platform of trussing, before tumbling another fifteen feet or so. A couple cans of stain become the proverbial cherry on top.

Medical Prognosis: Any fall over three stories is likely to be fatal. Since the momentum of Harry and Marv’s tumble was slowed before they hit the ground, there is still a small chance of survival.

Probable Result: Who are we kidding? Harry and Marv landed on their back. I’m going with Rat Bait this time. 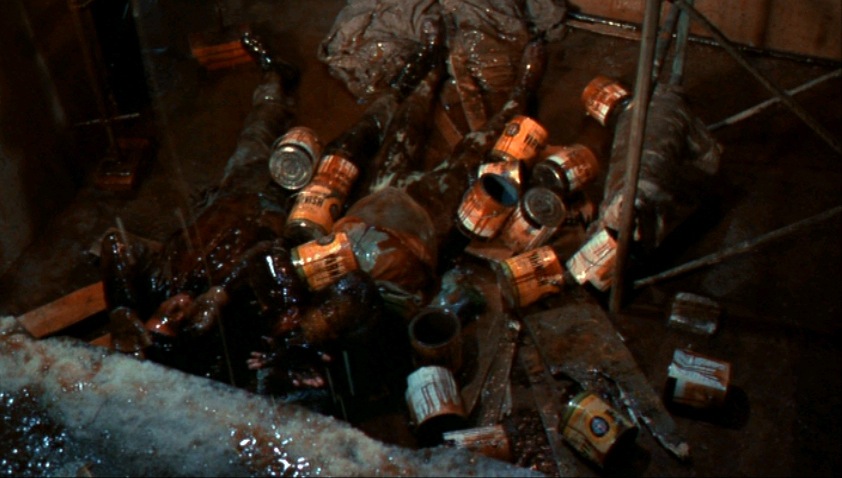 Home Alone 2: Lost in New York is still one of my favorite holiday movies. But, after all of these years, I no longer live in the dark. I mean, we’ve all see what just playing the part of Kevin McCallister did to Macaulay Culkin. He’ll never be the same.

Neither will Harry and Marv.