How Sherlock Holmes Would Read the Bible 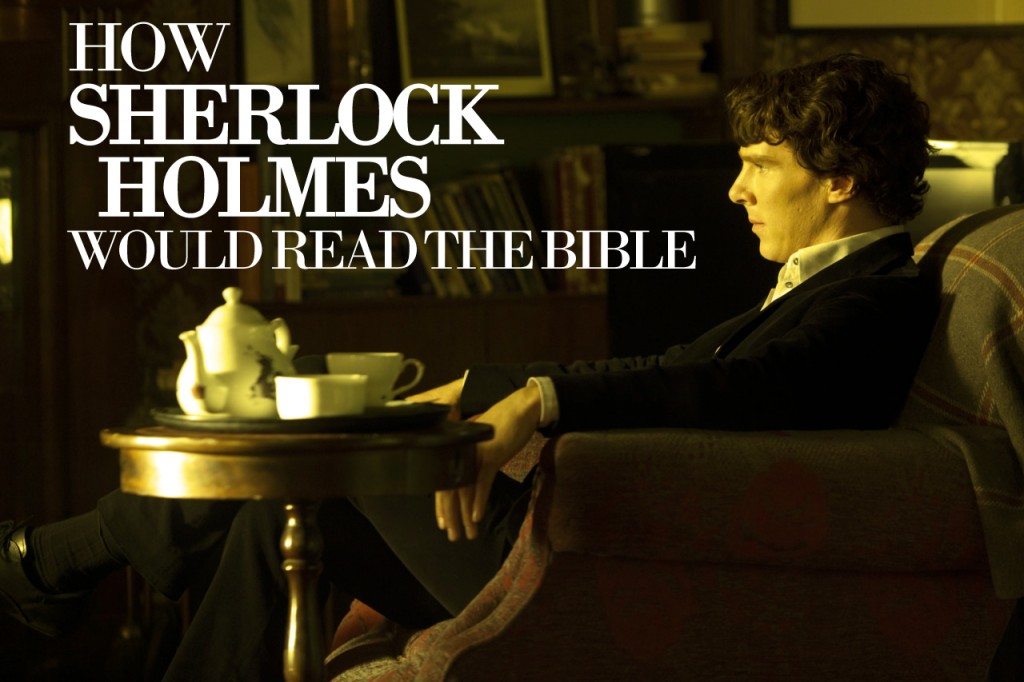 One of my favorite shows on television is BBC’s Sherlock. At the onset, Sherlock’s premise doesn’t seem all too revolutionary—the modern day retelling of Authur Conan Doyle’s beloved character—yet the execution of that premise is impeccable.

What makes the show so interesting to watch is Sherlock’s (played by Benedict Cumberbatch) keen sense of observation. No detail gets past him. In the episode The Great Game, Holmes speaks about the innate power of observation:

Officer: But what has this got to do with that painting. I don’t see wh—

Sherlock: You do see, you just don’t observe.

Thinking about observation sparked an idea in my mind. How would Sherlock Holmes read the Bible? What would he observe about the text? How many preachers would receive a pithy insult after he sat through one of their sermons?

Often, when it comes to the Bible, we see, we just “don’t observe.” But what if we read the Bible like Sherlock would? I think we’d find ourselves following five very important principles.

1. Observe whole stories and passages rather than verses and chapters. In Sherlock, a clue is just a clue. By itself it is useless or at the most, open to a wide variety of interpretations. Much the same, verses by themselves aren’t much use if we rip them from their present context. Take for instance a verse we’ve all heard before, Luke 6:38:

“[G]ive, and it will be given to you. Good measure, pressed down, shaken together, running over…”

2. Understand that no event is ever isolated. What impresses me so much about Sherlock, is the ability of the show’s writers to make numerous unrelated events converge into one cohesive story. While each episode in the Sherlock series has a beginning, a middle, and an end, it’s also a part of a larger framework. Holmes isn’t just solving individual cases, he’s participating in a larger narrative that highlights his struggle with the detestable Moriarty.

While each biblical passage has a big idea or point, we must also understand it in the context of a larger narrative. Jesus isn’t just struggling against the Pharisees in Matthew’s gospel, he’s working against an enemy who’s chief goal is to cause confusion and evil. When reading a passage ask yourself, “How does this story relate to the bigger picture?”

3. Observation coupled with meditation equals inspiration. Very rarely does Holmes observe all the clues at his disposal and immediately come to a conclusion. In The Hounds of Baskerville, Sherlock has an especially difficult time solving a mystery that seems to involve wild, mutated creatures. Knowing his situation, Holmes asks for his associates to leave him so that he can go into his “mind palace.” After a period of meditation, Sherlock receives a spark of inspiration that helps him solve the mystery.

I used to view the story of Jesus washing the disciples feet in John 13 as a simple act of servitude. One day, I noticed something peculiar about the passage. As Jesus begins to wash his disciples’ feet, Peter initially refuses. Jesus replies, “If I do not wash you, you have no share with me” (13:8). Peter responds to Jesus by asking him to wash his hands and head as well! Interestingly, Jesus says, “The one who has bathed does not need to wash, except for his feet…” (10)

What does all this mean? I had to put the passage away for a while and just meditate on it. For days I thought about these words until I finally realized what Jesus was getting at. Jesus was using feet washing as a symbol of his atonement. The reason he wouldn’t wash Peter’s hands and head is because he was trying to teach the disciples that his death would be enough. Nothing more was needed. Don’t just read the Bible, chew on it.

4. Observe the original meaning of the text, not the contemporary one. Holmes often butts heads with the police. This is because he is not willing to trust their interpretation of a particular event or crime. Sherlock looks not for how an event may be interpreted through the eyes of onlookers, but how they were viewed by the people involved.

To get to the heart of any biblical message, we must first look at what the original author was trying to communicate through each passage. Only after we find this out, can we apply its principles to our life. If not, we run the risk of placing meaning into the text, rather than pulling out what’s already there. There are a number of Bible study tools that can help you out with this step.

5. Observe through the lens of a character in the story or text. Holmes often makes deductions based on his ability to place himself in the shoes of a witness or perpetrator. “Why would they do this?” “What is motivating this person?” By observing in this way, Sherlock has an easier time splicing together events.

When you’re reading a story, do you place yourself in the shoes of the characters? Do you visualize the event occurring right before your eyes? “What makes Peter think this way?” “Why would Paul say this?”

I would love to hear Sherlock Holmes talk about his observations regarding the Bible. I can imagine that he would point out some things we didn’t notice before. In equal amounts, I imagine he would probably also ask us to kindly (or not so kindly) shed some of our prior presuppositions about certain biblical texts. Either way, he would likely inspire us to observe a little more thoughtfully.