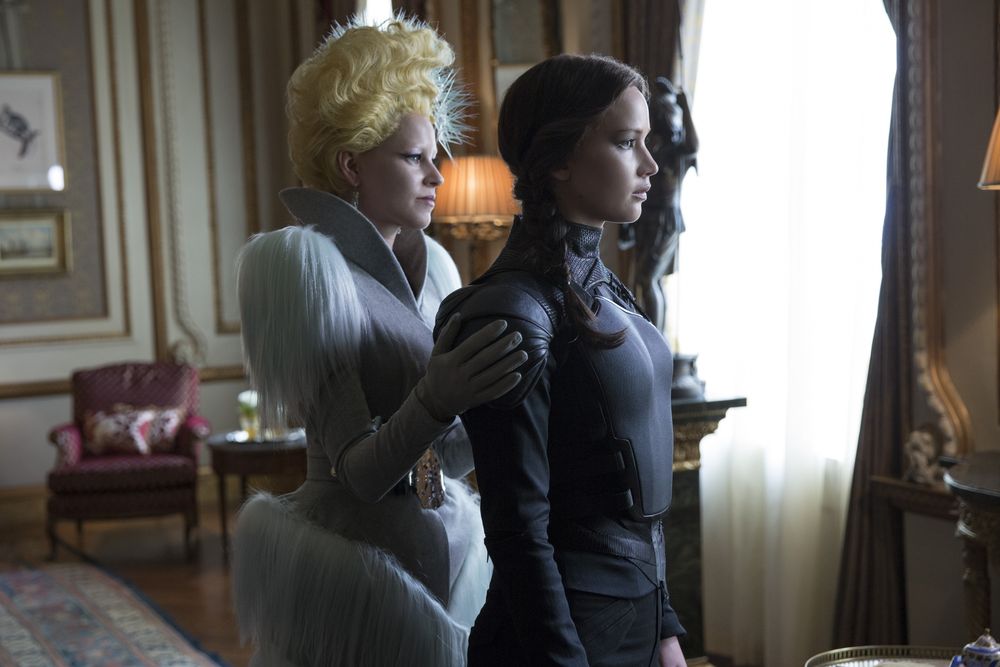 Jennifer Lawrence’s appearance in The Hunger Games: Mockingjay – Part 2 embodies juxtaposition. While rummaging the corridors of District 13, Katniss is modestly dressed. Humble clothes divert attention rather than absorb it. Her hairstyle is simple; her face unadorned. If you didn’t know Katniss was the Mockingjay, you probably wouldn’t have guessed it.

Outside of District 13 is another story. Emerging with her bow and arrow, Katniss personifies a queen bee protecting her prized hive. Her battle suit, with all its design flairs and built-in armor (a present from her costumer, Cinna), radiates both fashion and ferocity. Even her makeup—especially in one pivotal scene near the end of the movie—looks more at place on the runway rather than in the gunroom.

Appearance—hair, clothes, jewelry—has always cast a large shadow over The Hunger Games series. Note how the Capitol citizens look compared to those in Katniss’ home district. With their outlandish obsession to exterior extravagances and splashes of color, the Capitol’s upscale population stands as a visual contradiction to the ashy drab of the poverty-induced districts. In The Hunger Games films, fashion, more often than not, represents disparity—both economic and legislative.

It’s not surprising then, that the franchise’s last movie uses style to paint another metaphor—this time about combat. If there is one takeaway from Mockingjay – Part 2, it’s that we as humans love to dress up violence. Much like Katniss’ handlers, we make a window dressing of war. We like to place it in our own arenas, in our own personal Hunger Games, coated with thick makeup and wavy eyelashes. But violence always has its costs, even if it hides under the glory of propaganda.

Mockingjay – Part 2, based on the second half of Suzanne Collins’ book of the same name, begins almost immediately where Part 1 ends (spoilers ahead if you haven’t seen the first three films). District 13, led by the ambitious President Alma Coin (Julianne Moore), stands on the verge of bringing the Capitol to its knees. The Capitol’s supreme leader, President Snow, is grasping at straws, and it finally looks like the long period of governmental oppression is over.

Yet, as optimistic as the incoming battle reports sound, Katniss’ psyche flounders in uncertainty. Peeta Mellark (Josh Hutcherson), her on-again, off-again fake boyfriend/fiancé (it’s complicated), struggles with his own identity after being brainwashed by the Capitol to kill Katniss. Swirling from this sudden shift in their relationship—and her own struggle with life outside of the arena—Katniss soon sets off to assassinate President Snow, hoping an arrow to the heart will offer her some form of resolution.

Though Mockingjay – Part 2 represents an extension of the series’ most powerful themes—poverty, tyranny, and sacrifice—the plot suffers from the same weaknesses that made Collins’ final book a disappointment. The internal logic of the narrative doesn’t always add up, and when the dots do connect, it’s overblown with heavy exposition. There’s also the final scene, which I won’t talk much about, except to say it’s a mess.

But, while Mockingjay – Part 2 fails to reach the franchise’s highest apexes, fans of the first three films will likely leave feeling satisfied. Patient and still, director Francis Lawrence (who also directed Catching Fire and Mockingjay – Part 1), allows the darkness of the story to seep into his characters’ skin. The weaker sections of the narrative are nearly redeemed by a collage of powerful, deeply intense sequences—the best being a sewer scene oddly reminiscent of James Cameron’s Aliens. As good as these moments are, however, the film finds its greatest potency when it chooses revel in the moral complexities of Katniss’ journey. 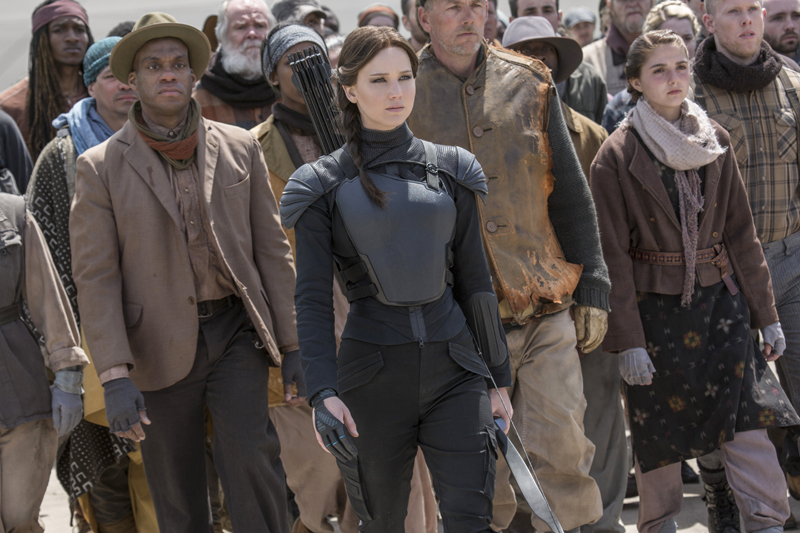 In the film’s first scene, Katniss has trouble speaking because of an injury sustained at the hands of Peeta. He voice is low and scratchy; her tongue struggles to pronounce even the simplest of words. If this introduction offers any insight into the movie’s intentions, it could be argued that Mockingjay – Part 2 is a story about Katniss discovering her voice as an individual and as a revolutionary.

This goal isn’t always easy. Katniss finds herself stuck in a perpetual loop; a powerful whirlpool of sorts. The violence spewing from the Capitol, while opposed by her present company, has ingrained itself into the rebels’ own tactics. They are becoming the Capitol to fight the Capitol. As a result, most of Katniss’ actions feel futile. She’s powerless, and powerless to stop it.

Katniss struggles to locate hope and morality in the barbarism of war. Freedom is being achieved, but at what cost? Lawrence gracefully alternates between both imprecatory and lament (often in the same scene). At times, she cries out in righteous anger, calling for a reckoning. Yet, even while she cringes at evil, Katniss doesn’t have much interest in becoming the face of a bloody war. She renounces the killing of innocent people, even if it brings about a desired result.

As Katniss progresses as a character, she grasps to gain control, sifting through evil that’s been simply outfitted for the cameras. At one point, Peeta, dealing with demons of his own, asks Katniss, “What’s real and what’s fake?”

This is the looming question Katniss must answer as her story concludes. What is real and what is a sham? What is authentic, and what is merely a dressed up version of the same problem?

As Katniss eventually discovers, it just might be time to take the makeup off.