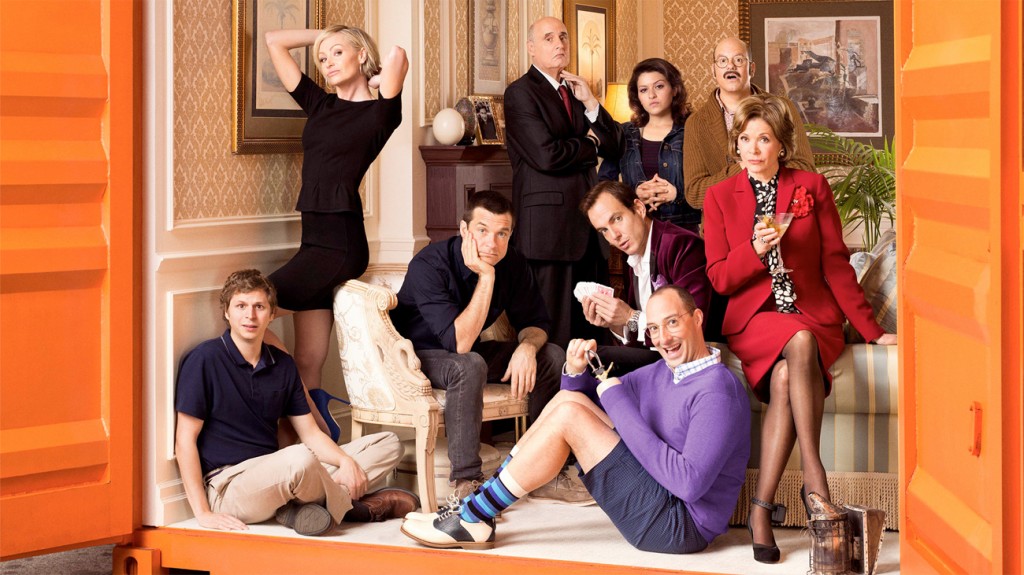 Remember when Arrested Development debuted a fourth season on Netflix? You can probably recall the week or two leading up to it where countless bloggers and entertainment news sites heralded the triumphant return of the cult phenomenon. Maybe you forgot all about that. After all, that happened, like, a year ago, right? Wrong. That was barely a month ago. It’s really odd for someone like me, an obsessively dedicated fan, to forget all about it. A few weeks go by and it’s old news all of a sudden. Wade asked me to write a review of the new season when it premiered. I kept putting it off and putting it off because I’m a lazy and terrible person. Now, a month later, I almost don’t think writing a review is a good idea. No one’s going to read this. The wave of excitement for the new season has come and gone. And it left quite suddenly.

It could be argued that this one of the side effects of releasing it on the internet and not conventional television. The attention span of the internet is very short. Nothing gets fifteen minutes of fame. It’s more like fifteen seconds. Remember that guy who sang the Numa Numa song on his webcam? Of course you don’t. Remember the Star Wars kid? Nope. Remember Paula Dean? Lol. Jk (and Jk about using Jk).

I really wish that was the reason why season four of Arrested Development came and went like a flash in a pan, but I don’t think it is. I watched all fifteen of the new episodes the week it appeared on Netflix and I’ve got to say that it was kind of a let down.

For those of you who have never seen Arrested Development let me just say YOU’RE THE REASON THE SHOW WAS CANCELLED IN THE FIRST PLACE! WHERE WERE YOU?!!?! But I’m sure you’ve heard that at least once or twice from a weird friend or acquaintance who is a fan of the show. That is one thing everyone should know: Arrested Development has an incredibly devoted fan base. And with good reason, too.

The writing staff, led by Mitch Hurwitz, created such a rewarding experience for fans who stuck with the show through all the episodes and paid close attention to all of the tiny details. I can’t begin to describe how layered some of the jokes can be. Something can be funny on the surface because it’s simple slapstick, but on top of that it’s a reference to something that happened two seasons ago, and on top of that it’s being said by this guest star who is famous for being in this movie which makes it a reference to blah blah blah. Some times it’s hard to laugh at a joke because you’re busy being amazed that someone took the time to write something so subtle/smart/detailed/genius. If you’ve never given the show a real chance, I recommend it. Start from the beginning and pay attention. It is one of the most unique comedy experiences you can have.

One of the most impressive things about the first three seasons is how much the writers were able to cram into a neat twenty-two minute package for FOX. There is so much story. There are so many characters. Most importantly there are SO MANY JOKES! In order to fit in everything, the pacing of the show had to be like lightning. On Netflix there is no time restraint. An episode can be as long or as short as the “creatives” see fit. The average length of an episode in season four is thirty minutes. That’s a whole extra eight minutes more than what the show is used to. At first this might sound like exciting news to a fan. “That’s eight more minutes overstuffed with story, characters, and jokes,” you might foolishly think.

The show does not stuff those minutes with anything. Instead it uses those minutes to stretch out, slow down, and give us some room to breathe. To me that’s the last thing the show needs. I believe it is most enjoyable when you’re on your toes. I was actually bored during a few episodes.  That’s never happened to me with this show!

Let’s talk about the structure of the new season, because it differs greatly from the first three. The show has always followed the members of the dysfunctional Bluth family in a faux documentary style. Up until season four each episode would follow Michael Bluth (played by Jason Bateman) as he desperately tries to keep his family together. Each episode was very much an ensemble piece.

Filming the new season was met with scheduling conflicts. Getting all of the actors in the same room on a given day became impossible. A new method of storytelling was introduced as a way around this problem. All of season four revolves around two or three big events that take place in the lives of the Bluth family. Each episode tells the story from a particular character’s point of view. The first episode shows Michael’s experience. A scene might have another character like Tobias (one of my favorites) acting very odd for no apparent reason. Several episodes later you’d see things from Tobias’ side, including what happened to him right before his scene with Michael and now his actions make perfect sense!

There are times when the story telling technique offers some big laughs as things begin to make sense from different perspectives, but overall it lost its appeal to me five episodes into the season. I found myself getting increasingly frustrated watching episode after episode knowing that the overall story is not going to progress. You’re just going to watch the same things over and over for fifteen episodes. Maybe if a shorter story arc was told this way, I would have felt differently about it.

Look, I don’t it to come across like I hate the show now. I don’t. I was even a little nervous about admitting to the internet that I was disappointed with the new season. When you post something on the internet it’s almost impossible to take it back. There’s something terrifyingly permanent about the internet. You can try deleting that twitter argument you had, Chris Brown, but people will still be able to find it months later.

Even at its worst the show is still more entertaining than most sitcoms on TV today. I’m not going to pretend like there was no fourth season. I have used this tactic with other “comebacks” (Indiana Jones and Star Wars are both TRILOGIES! AND THAT’S IT!). I’m excited to see what happens next. Netflix wants more and I guess I do too. Mitch Hurwitz said that season four is act one of a three act story. There are already clues and details hidden inside this season that, if given the chance to make more, will lead to huge pay offs. I’m excited for that.

While some new elements of the show failed in my opinion, it’s encouraging to see the they’re trying new things. Arrested Development is at its best when taking risks. You can say that some of the more obscure jokes risked alienating the audience. Oh, and two cousins fall in love with each other. That’s a risk the show took. I’m glad Mitch Hurwitz treated this return as something new and not just a reunion show. It wasn’t some “best of” experience where they try too hard to recreate the magic of our favorite moments. That should definitely be applauded. I think this is the weakest season of the show, but at least it still feels like the show. I’ll see what a second viewing does to that opinion. After all Arrested Development is a show to be enjoyed with several times over.

Oh! And the end of the season was a real let down. I was like “really? they’re just going to end it like that?”

Taylor Johnson is a youth pastor, comedian, and writer. You can follow him on Twitter here: @taylordson.