Wade’s Wisdom: The Truth Behind Taylor Swift’s Shake It Off

Last year, I took some time to dissect Taylor Swift’s song, 22. It’s upbeat, fun, and a reflection of the darkness surrounding Taylor’s life.

Yes. 22 is more than just a catchy tune for teenagers driving to prom. It bleeds with clear allusions to failed relationships, sorrow, and, of course, an episode of The Twilight Zone. If you haven’t had a chance to read my piece, you can do so here.

Today, I’m going further down the rabbit hole by critically analyzing Taylor’s (we’re on a first name basis) new song, Shake It Off.

Shake It Off has been downloaded over one million times since its release last month. It’s got a sick beat (pun) and Taylor takes an opportunity to show off her ever expanding vocal range. The song, seemingly about one’s ability to “shake” off criticism—choosing instead to press forward with clear and decisive life goals—is beloved by all. But, unbeknownst to many, there’s a deeper, darker layer to Shake It Off that involves religious sects, Bill Cosby, and hallucinations. Taylor herself says, “All I think about are metaphors and cats.”

Today, we’re going to find out just what those metaphors are. 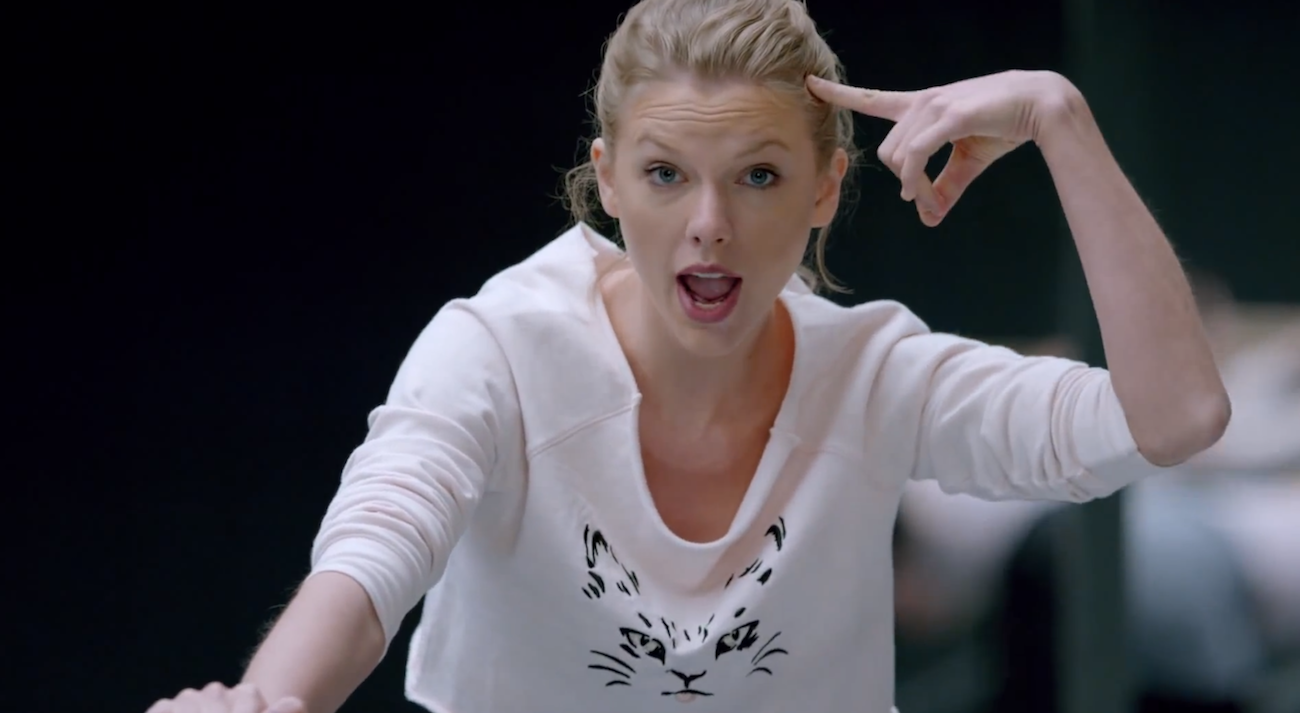 The Truth Behind Taylor Swift’s Shake It Off

Shake It Off begins innocent enough. The strike of a snare drum commences a rhythmic beat that will have even the coldest of cynics on their feet waving an opened flip phone.

Then, Taylor’s silver voice begins to reverberate into the speakers. From the beginning, it’s fairly apparent this isn’t your average pop song. Taylor seems keen at telling us something important. A message so crucial that she’s taken great pains to hide it beneath layers of symbolism and allusive poetry. A message only the most critically attuned can understand. I hope you will stay with me until the end because I’ll be tying together all the strands in one analogy that’s, frankly, as bizarre as it is chilling.

I stay out too late

Got nothing in my brain

Most tend to interpret these opening lines as nothing more than a brief statement of frustration and regret. Critics have created rumors about the star. She stays out “too late” and has “nothing in her brain.”

In the face of such conclusions, we must ask ourselves, “Has Taylor ever been known to resort to simplistic interpretations about the modern trappings of adolescent life?” If you answer yes, you should become a comedian because you apparently make false statements to incite laughter.

Let me bring attention to two important points from these introductory remarks. 1) Taylor comes home early and 2) there is something in her brain.

What exactly is in your brain Taylor?!

An even better question could be, “What inside of your brain could possibly be transforming you into a recluse, drawing your mind inward while all of your friends are out having a good time?” If this isn’t a cry for help, then someone please make sense of the world for me.

I go on too many dates [chuckle]

But I can’t make ’em stay

LOL. Nice one Taylor, eating dates cleans my body out too. It’s comforting to know celebrities have dietary issues just like the rest of us!

Notice the “mmm-mmm” in these lines. This phrase, along with the “dates” reference, is the second time Taylor has mentioned food (Taylor would go on to say, “mmm-mmm” eight times in Shake It Off).

The symbolism seems pretty clear to me: Taylor is being starved to keep up with her seemingly “perfect” image. She’s so hungry she can’t help but say, “mmm-mmm” when she sings.

WHEN WE WILL GET THE POINT PEOPLE AND HELP TAYLOR.

But I keep cruising

Once, I saw a lady wearing a shirt that said, “Can’t stop, won’t stop.” She was eating a chicken wing. I feel like this experience illuminates some of the meaning behind Taylor’s lines. 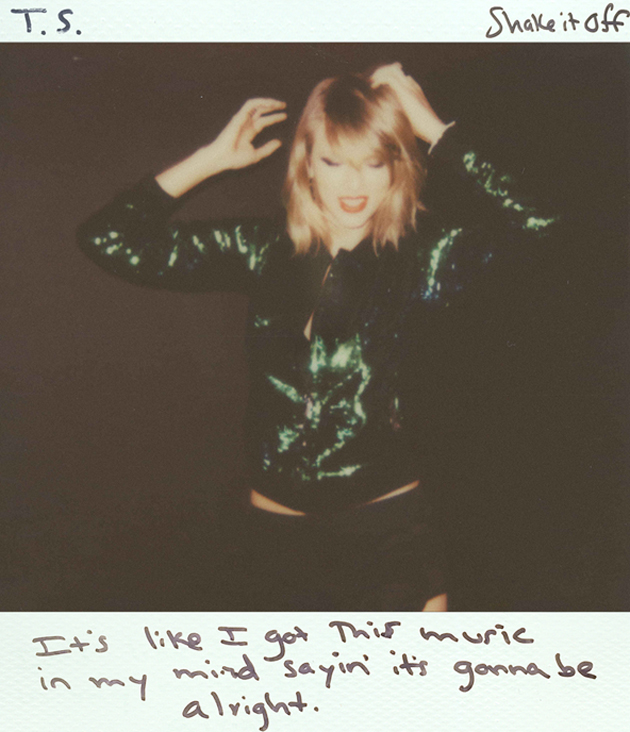 Let’s just stop here and setup a Bear Grylls’ makeshift camp for a moment. I think we just found out what Taylor has in her brain. “It’s like I got this music—In my mind.” Taylor is experiencing what many call “music hallucinations.” Here’s a definition I pulled off a website through Google: “Music hallucinations occur when a set of neurons in the brain begin to misfire and patients feel as though they are always hearing music, even though in reality there is nothing playing.” This hallucination is obviously affecting Taylor. Just look at her grammar in this section of the verse: “like I got this music.” This poor choice of words is not like Taylor at all.

Herein lines the meat and bones of the entire song. It’s in the chorus that Taylor shows us her entire hand. I don’t have to point out that Taylor uses repetition to emphasize the words “play,” “hate,” “shake,” “break,” and “fake.” Taylor is a songwriting genius, why would she resort to using the same words over and over again when she could just pull from her extensive vocabulary?

Because she’s trying to make a point. Just like there are multiple uses of the same word, she’s struggling with who she is as a person. Just take a look at her Shake It Off video. Taylor plays no less than ten different characters. A ballerina, a breakdancer (She’s killer with a boom-box isn’t she?), a hip hop artist, interpretive dancer, ribbon twirler, a robot from the future, a person wearing hipster glasses, a cat burglar, a young man wearing an orange shirt, and, lastly, a cheerleader. 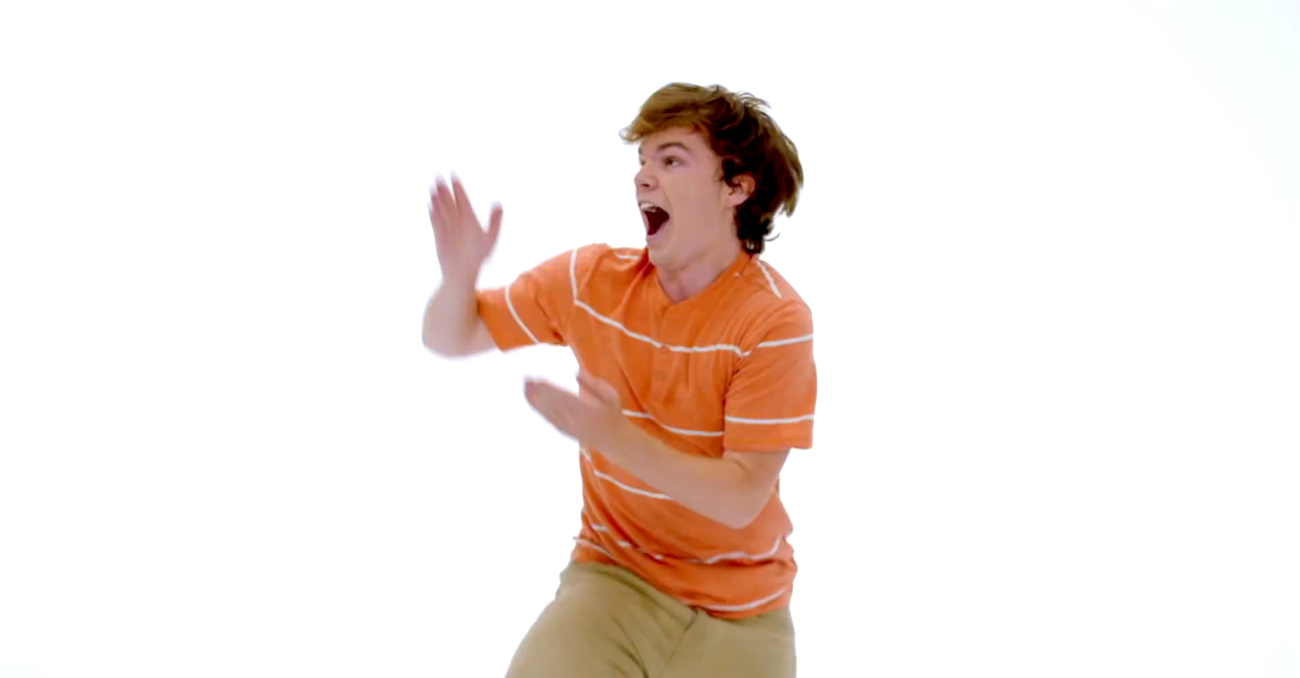 Taylor Swift – The Master of Disguise!

WAIT A MOMENT. A cheerleader? This is an unusual choice given the lyrics in one of Taylor’s previous songs, You Belong with Me:

But she wears short skirts

And I’m on the bleachers

Why aren’t you on the bleachers anymore Taylor? Have you traded in your good-girl persona for something less conspicuous?

The truth might be more unsettling. If you examine the You Belong with Me music video closely, you’ll soon notice that Taylor is playing the role of both the main characters.

SHE’S THE GIRL ON THE BLEACHERS AND SHE’S THE CHEERLEADER.

The Master of Disguise strikes again! – You Belong With Me

Coincidence? Try this on for size. You Belong With Me is track 12 on Taylor’s Fearless Platinum Edition album. If you count the characters (including spaces) in Shake It Off, you get a very familiar number. 12.

I love being right.

Taylor’s struggle with identity goes back years, maybe even decades. Who is she? Someone in the spotlight or a person resigned to the shadows? Where will she find her purpose in life? All the deep philosophical questions posed in this chorus would have the likes of Kierkegaard scratching his head.

I never miss a beat

I’m lightning on my feet

And that’s what they don’t see, mmm-mmm

that’s what they don’t see, mmm-mmm

And that’s what they don’t know, mmm-mmm

That’s what they don’t know, mmm-mmm

A couple of things stand out to the committed observer in these lines. First, Taylor is still extremely hungry. She’s now resorted to eating pieces of her sentences, leaving us with fragments. She’s also referring to her multiple identities in the second person. “They don’t see.” “They don’t know.” Could it be that she is mentally hiding things from herself that she purposely chooses not to believe?

Let’s jump right down to the chorus again. This is where things get extremely dicey. The title of the song is Shake It Off—lyrics which obviously dominate this section of the tune. Only those familiar with the Quaker movement in the 1700’s would understand the full analogy Taylor’s making here. Shake It Off is a clear reference to the Shakers—a small religious group that broke away from mainline Quakerism before settling in colonial America during the 18th century. I’m sure you already know a great deal about the Shakers, but let me refresh your memory. The Shakers believed in two unique ideas: ecstatic behavior during worship services (of which they receive their name) and celibacy. They never marry.

What could these two ideals have to do with Taylor?

Check out this line from a recent Rolling Stone article about Taylor’s new album:

[S]he hasn’t dated at all since breaking up with One Direction singer Harry Styles more than a year and a half ago. ‘Like, have not gone on a date,’ she [Taylor] says. ‘People are going to feel sorry for me when you write that. But it’s true.’

Taylor is in a dark place. Alone. Broken. Her romantic life is comparable to that of a Shaker.

Just think, while you’ve been getting down and out about the liars and the dirty, dirty cheats of the world,

You could’ve been getting down to this sick beat.

At this point in the song, Taylor gives us a brief monologue. It’s important to note that she says the word “hey” three times. My, my, my, who else might have made a habit of saying, “hey” three times in a row?

Could it be this guy? 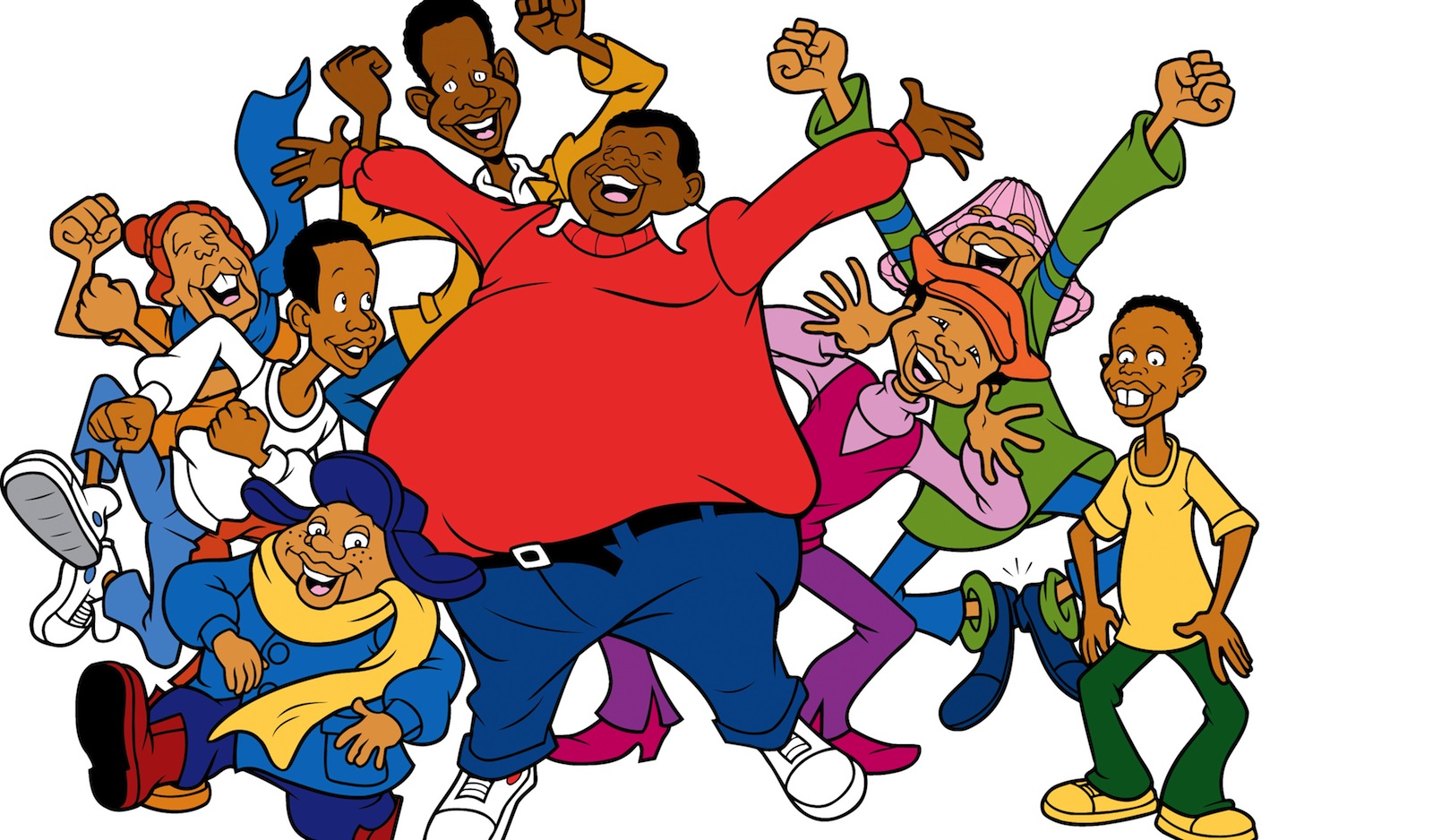 Yes, none other than Bill Cosby’s Fat Albert. Taylor’s extended her references to food, hunger, and body image by comparing herself to an overweight television character. Her self-esteem is broken and we see it come to light here. By saying, “Hey, hey, hey,” she has psychological taken on the appearance of Fat Albert. This shouldn’t come as a surprise. Taylor would be very familiar with the cartoon.

The only way Taylor could have made this clearer is if Kenan Thompson were in her music video.

My ex-man brought his new girlfriend

Does she ask her new friend with the nice hair to talk? Nope. What about dinner? Not that either. Taylor is symbolically resigned to the relationship status of a Shaker. All she can do is ask him to shake in a ritual dance that ends in a handshake and no numbers being exchanged. She truly believes she will never marry.

Note: The rest of the song is a reiteration of the chorus—an obvious reference to the seemingly never ending nature of Taylor’s despair—so I’ll go ahead and jump to the conclusion.

As we come to the end of this analysis, there is a piece of information I’ve yet to divulge. One, that gives us an important clue as to how Taylor plans to move forward with her life. The title of Taylor’s new album—which will feature Shake It Off—is “1989.” Taylor references this title by wearing the number 89 on a jacket during her Shake It Off music video. While most of Taylor’s symbolism in Shake It Off has been difficult to decipher, this last clue is by far the most challenging. 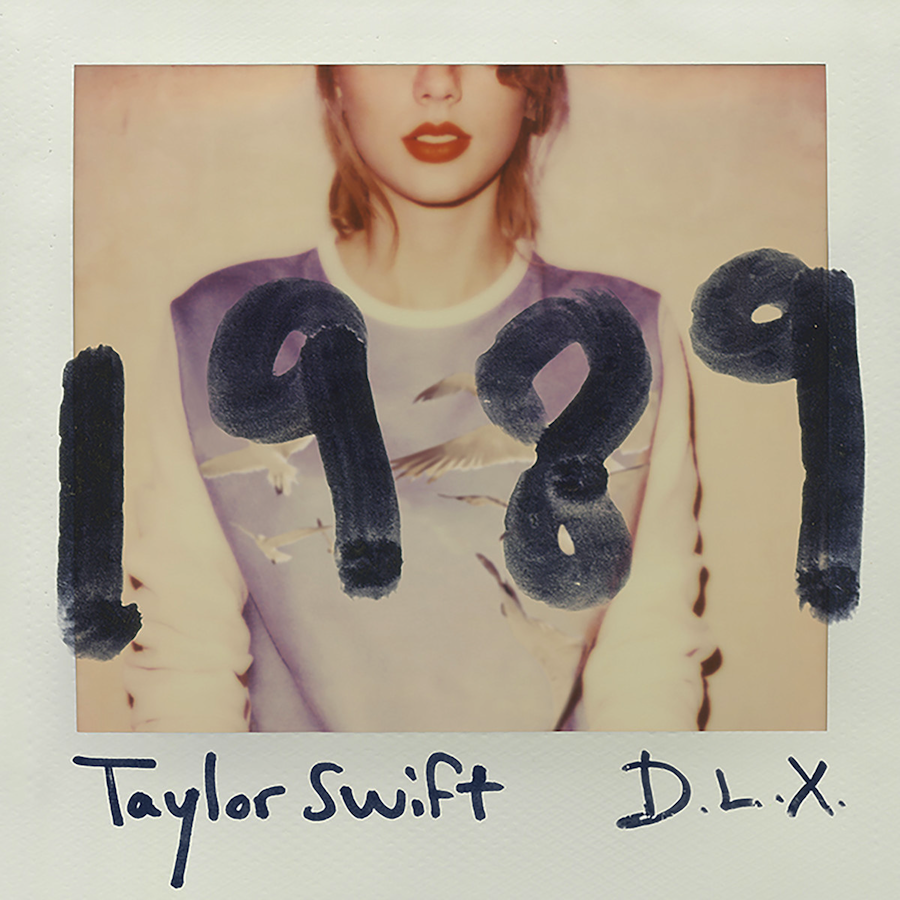 I realize I may be the only one to make this connection (some might even call me crazy for it), but it seems to be the proverbial thread that ties all of the lose ends together. The issue of self-identity. Taylor’s body image. Her inability to find the “one,” pushing her instead to wallow in singleness. 1989 is a metaphor so chilling and deep, only the most attune will see it at first. Taylor dreams of reinventing herself so she can shed the weights from her past. All of her aspirations are summed up here. It’s a picture of rebirth. A picture of a restart.

You hear that? That’s the sound of your mind being blown.

Let Taylor know you’ve found out the truth behind “Shake It Off” and that you stand with her. Click this link to tweet her a message.

Wade’s Wisdom is a regular humor column by Wade Bearden. Here, he shares his wisdom, knowledge, and intricate understanding of life to readers all over the world.